The golf YouTube channels you need to watch in 2023

Of the many technological advancements in the sport over the past decade, one in particular has perhaps had the biggest impact – YouTuber Golf. Since their introduction, the way we consume product reviews, absorb the latest advice, research our next golf break, listen to our favorite talking points and even just relax and enjoy the sport has changed forever. It’s impossible to list all the channels currently on the platform, but below we’ve noted some of our favorites, along with a quick rundown of what they do!

The guy who started it all. Mark’s first videos hit YouTube in 2007 and in addition to providing PGA instruction, Crossfield also brought some of the world’s first video golf club reviews. There has hardly been a club launched by a major manufacturer in the past 15 years that Mark hasn’t had on the channel at some point, although recent years have put more emphasis on the helping golfers get through much of the manufacturer marketing noise, with an increased focus on data – as well as regular content with his friend, channel producer and fellow PGA pro Coach Lockey.

Simply put, the biggest golf channel on YouTube. Rick has amassed over 2,000,000 subscribers and over 600,000,000 views since starting his channel in late 2011. Initially focused on tuition and club reviews given his experience as a As a PGA professional, the channel has grown over the past decade to include global collaborations, many different sets of challenges and just about every other type of golf content you can imagine!

Another channel that started in 2011, Piers and Andy from MeandMyGolf have become arguably the most well-known golf instructors in the world. The pair have stuck almost exclusively to tuition-based content, which has seen them become one of the most trusted sources for all things golf swing. For much of the past few years, their YouTube has also helped draw viewers to their website, where customizable golf plans can be created, depending on the individual’s needs. 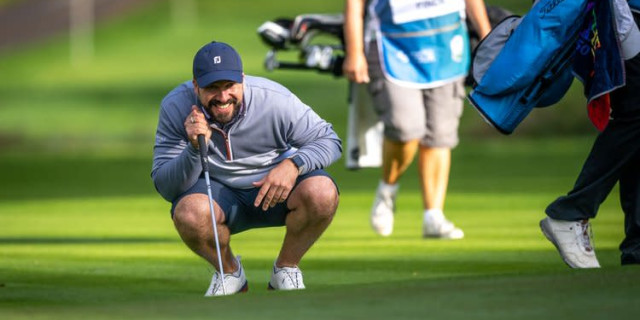 Peter Finch actually joined YouTube the day before his good friend Rick Shiels in October 2011, and much of his early content saw him collaborating with Shiels on their channels during matches on the course. Like others, he relied on his experience as a PGA Pro to offer tuition and club reviews, but in time he could perhaps be called the all-rounder of YouTube golf; play in challenge matches, attempt his annual quest for the Open, create on-site content at tournaments, and continue to do the occasional club review.

Despite a marketing partnership with Callaway Golf, the No Laying Up team tends not to stray too regularly into the world of golf products. Instead, their channel documents their time traveling the world, with viewers often tuning in to see the shenanigans of the individuals behind the brand. Content has always strived to be broadcast-quality, but the past two years have seen that taken a step further, with the episodic releases of shows from their “Tourist Sauce” and “Strapped” series. The gentlemen first gained popularity with their podcast which has hosted some of the biggest stars in the sport, and so it’s no surprise that these are now also recorded for YouTube, as well as a weekly show ahead. -first of the PGA TOUR events.

Erik Anders Lang is a content producer who has made it his personal mission to share his enjoyment of the game with golfers around the world. The content is high quality and generally follows Erik on his travels, either as part of his “Adventures in Golf” series for Skratch or his time spent around some of the sport’s most well-known venues. Much of its content is now shared through ‘Random Golf Club Films’, a network created to bring golfers together online and in person – with RCGs now across much of Europe, the UK and Ireland , and just about every state in the United States!

Liam Harrison’s “Golf Mates” was created to help make regular golfers feel included in online golf communities. As we’ve seen above, many other British ‘influencers’ come from a professional PGA background, and Liam’s aim has been to capture the more regular trials and tribulations of his fantastically named friends. (Mr. Barlow, Old Man Pat, eBay Pete, Young Man Josh, etc.) on the course. While there is great content on the Golf Mates channel designed to improve your game, our favorite videos tend to be of the guys on the course having fun!

And along the same lines… Bad Golf was created by comedians John Robbins and Alex Horne and the gentlemen won’t blame us for saying that the channel initially had a very appropriate name! Their first video explains how the pair had recently taken up the sport and wanted to document their time on the course as “bad golfers” because they thought it might be more enjoyable to watch than most other more established golfers on YouTube. However, over time their golf has improved a lot and over 50,000 subscribers regularly tune in to watch the guys compete on the courses in the South East. Still a good fun watch and incredibly useful as a course guide if you visit one of the courses they have played!

Back to the world of the PGA Pro, and James Robinson’s channel… Let’s do it, and let’s do it now! Robinson’s content usually sees him reviewing the latest gear, as well as sharing tips and lessons, as well as updates on his own game. An extremely affable personality, the channel benefits greatly from James’ direct nature, and the content is easy to understand and extremely enjoyable! In addition to the above, James also follows the course regularly and is around some very good golfers as well. A good watch to learn by osmosis with chain stars frequently bumping into it in the low 70s.

The Good Good gang is another group that spends its time making golf too much fun! The team has gathered from all over the US and are now mostly filming themselves on the course competing against each other – and even taking on some of our UK based stars. If you’re looking for a good intro, check out their pinned video “The Greatest Golf Shot in YouTube History” which documents perhaps the craziest five minutes of on-course footage you’re likely to see. Among their cohort is GM Golf’s Garrett Clark who also uploads regular content to his channel – giving the team massive global reach in just a few short years of existence.

Back to the UK for our final options, and starting with The Average Golfer. As the name suggests, the channel was created to give regular golfers insight into clubs, courses and the sport in general. Over time, channel owner Andy has increased his production values ​​and is now creating fantastic travel content, especially from Scotland, which pairs beautifully with the more first-person videos as he takes his gear out onto the course for a test drive. All in all, a great watch for those looking for buying advice and general enjoyment of an average golfer!

Last name is one of the fastest growing channels in online courses. Danny Maude has amassed over 800,000 subscribers as he helps golfers “unleash their golfing potential”. His channel is almost exclusively tuition-based, with extremely informative and easy-to-follow videos. Maude tends to upload new content about once a week, which means there’s always something new to check out ahead of golf this weekend. If you’re new to his channel, we suggest browsing his catalog of tips to find the area of ​​your game that most needs a little attention…

Well, there are just a few of the best golf YouTube channels to keep you busy this winter and beyond. Let us know which are your favorites!

Music producers, here are the best YouTube channels for you